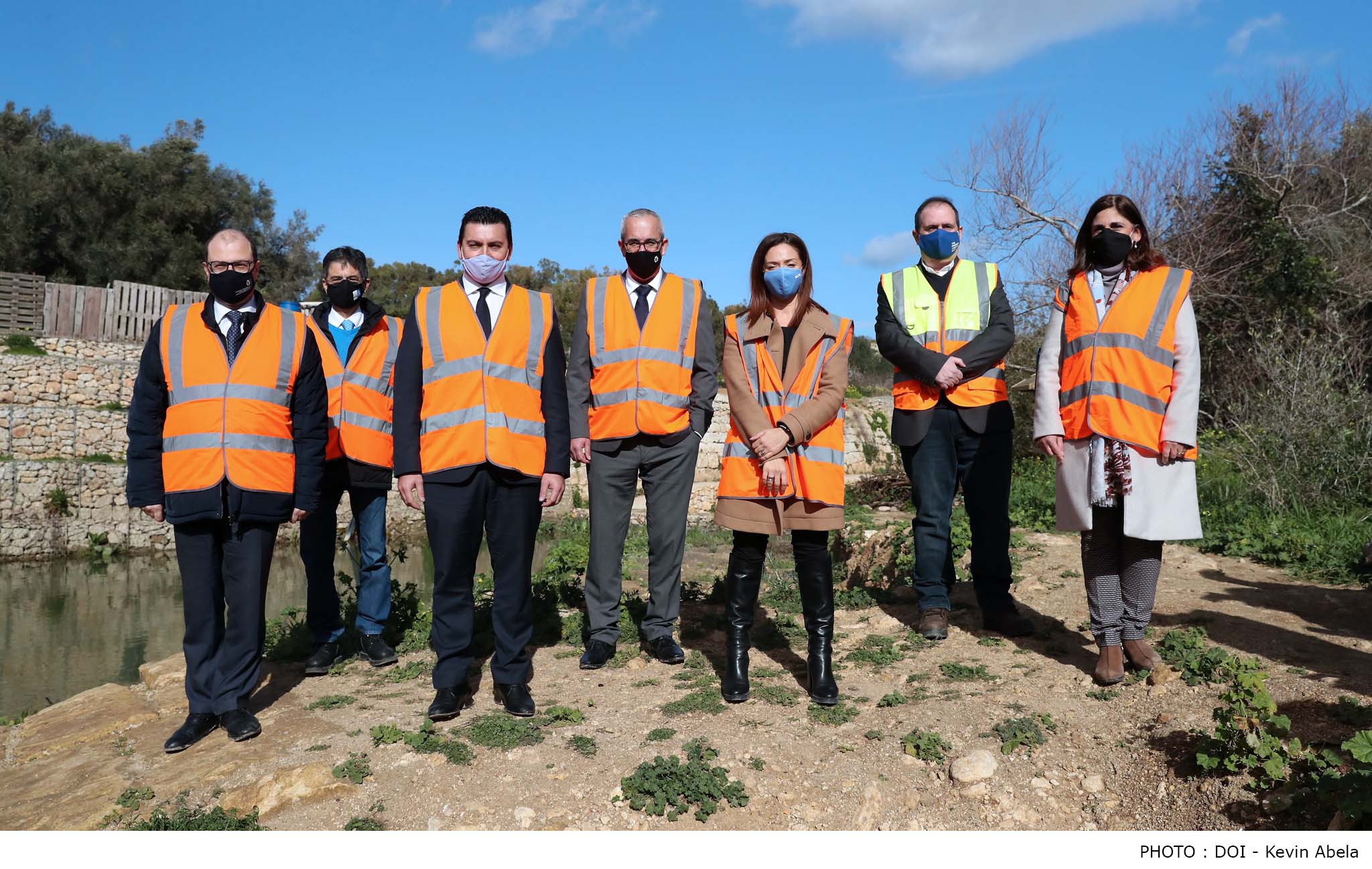 Agreement between the Government and Nature Trust Malta for better management of Chadwick Lakes.

Through an agreement signed among the Energy and Water Agency, the Environment and Resources Authority, and Nature Trust Malta, the eNGO Nature Trust Malta will be responsible for managing Wied il-Qlejgħa, more commonly known as Chadwick Lakes.
For the past two years, the Energy and Water Agency has been implementing projects of regeneration and rehabilitation within this valley. This €5 million project, co-financed by European Funds, is expected to be completed later on this year.
The agreement was signed during a press conference addressed by the Minister for Energy, Enterprise and Sustainable Development, Miriam Dalli, the Minister for the Environment, Climate Change and Planning, Aaron Farrugia, and the Parliamentary Secretary for European Funds, Stefan Zrinzo Azzopardi.
Minister Miriam Dalli welcomed this agreement as a clear example of how we can safeguard our country’s natural heritage.
« The works being carried out at Chadwick Lakes have uncovered long-buried features that were lost over time. Today, these dams which date back to the 19th century, are being restored to their original purpose of water storage, » Dr. Dalli said.
Minister Dalli explained how through this agreement with Nature Trust Malta, the Government is committing itself to the continuous conservation of Wied il-Qlejgħa, where around 5,000 trees and shrubs will be planted, and invasive species will be controlled.
« We are committed to taking care of our natural environment and ecosystems while looking at opportunities that may help the financing of research projects on making sustainability sustainable, » Minister Dalli concluded.
Minister Farrugia said that ERA is participating in this agreement due to the ecological and scientific importance of the site. He announced that ERA has started the process to heighten the protection of the Chadwick Lakes area, which will lead to the implementation of a number of measures intended for the protection of biodiversity in order to conserve, manage and restore the natural environment including the geological, geomorphic and physiographic aspects which make the site one of the most beautiful natural sites in Malta.
Minister Farrugia said that protected zones that are managed effectively are a critical tool for safeguarding the environment and our resilience as a country, conserving natural resources, and sustainable economic success, which will lead to an improvement in the quality of life across the board.
Parliamentary Secretary Stefan Zrinzo Azzopardi said that the signing of the agreement marks the partnership so that together, we strive towards a common goal – that of providing a better environment whilst taking care of our country’s natural landscape. He explained how the cooperation between the public and the private sector can source additional European funds, as the rehabilitation of this site is considered to be an example of best practice.
Dr. Zrinzo Azzopardi said that “about €5 million co-financed with European funds are being invested in the regeneration of Wied Qlejgħa. This agreement will go a step further whereby we will not just be regenerating the site containing a rich environmental and historical heritage, but we will continue to upkeep and preserve it.”
Meanwhile, EWA CEO, Manuel Sapiano, said that this project serves as a model for future projects in different locations, particularly the valleys around Malta and Gozo.
He also explained the EWA’s work in Wied il-Qlejgħa during the past months. Amongst other things, rubble that accumulated over time in the valley bed was removed. Together with the invasive vegetation the rubble was blocking the watercourse. He explained that for the first time, a bioengineering system was being used. This system involves the creation of walls, using trees. Their purpose is to protect the soil at the side of the valley and therefore, the pathways that have been created will continue to serve future generations.
Following the press conference, Ministers Dalli and Farrugia, together with Parliamentary Secretary Zrinzo Azzopardi visited parts of the valley, where Nature Trust Malta is currently planting several trees. Present was also the Mayor of Rabat, Sandro Craus.